The Great Return to Office 2022: Gas Gift Cards for Employees Are a Must-Have

If 2022 were a movie, the audience would never believe that just as companies are asking employees to return to the office, gas prices rocket up to record-setting highs. But that’s exactly what’s happened, and giving commuters gas gift cards has become a top incentive during the Great Return to Office 2022.

As an employer, you may not think you need to incent your commuters. But just scan a few headlines, and you’ll see that gas gift cards for employees are a hot topic—and quickly becoming an employee expectation.

The pain at the pump is very, very real for many employees

According to Newsweek (way back on March 10), “gasoline at U.S. pumps hit a record for highest average price, with regular gas costing $4.32 a gallon and diesel $5.06 a gallon, … If a worker earning minimum wage were to fill a 12-gallon tank of gas today, it would cost them almost an entire day’s pay.” Indeed, it’s the low- and moderate-income workers who feel the pain of inflation the most.

On June 3, Fox Business reported that “Google Maps workers recently wrote in a petition that the cost of gas wiped out their paychecks, which was followed by support from the workers’ union for Google’s parent company Alphabet signaling in a tweet ‘there’s a problem’ ‘when you’re not even paid enough to make it to work.’” Across the country, commute times are long, Statista reports, with 22% of employees spending 30 minutes to two hours—one-way—getting to work. 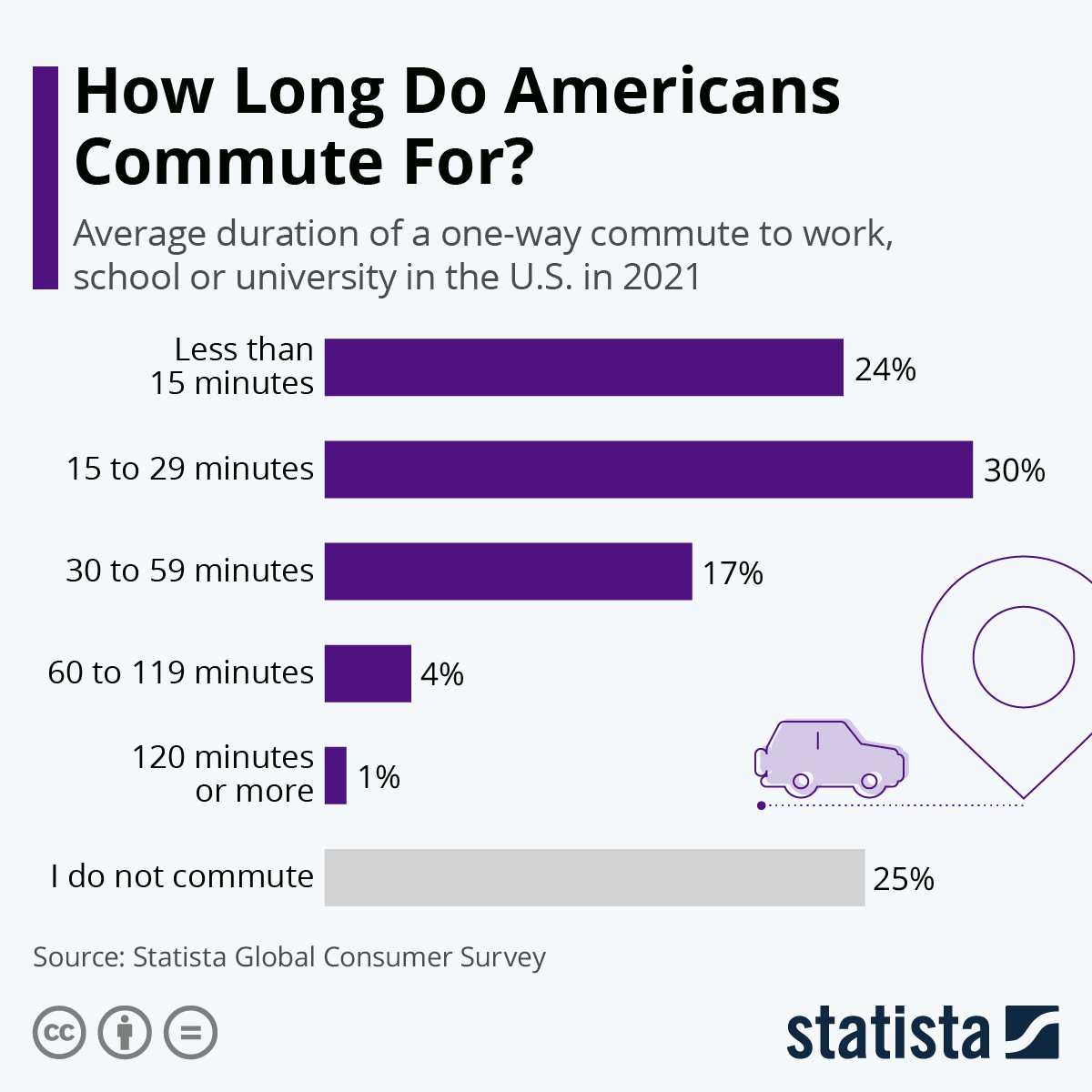 You will find more infographics at Statista

Commuters are quitting in droves

According to 2022 research from the ADP Research Institute, return-to-office mandates could drive employees, especially younger ones, to quit. A global study fielded in November 2021, the ADP report says, “Two thirds of the global workforce (64%) said that they have already, or would consider, looking for a new job if their employer wanted them back in the office full-time.”

Just stop and think about what would happen if two out of three of your employees quit. What would you do? How could your company keep going?

Resistance to returning to the office full-time is highest among 18- to 21-year-olds, because they are not as committed to their long-term career plans yet. The more worrisome data, though, is that over half of employees at their career peaks, ages 45 to 54, would pack up their virtual desks and resign.

“It’s a classic cost-benefit analysis,” said Traci Palmer, Vice President of People and Organization Capability, Citrix. “Employees have learned they can engage and be just as productive working from home, and as gas prices continue to increase, they are questioning whether the benefits of being in the office outweigh the time and money associated with commuting.” That’s why chipping in to cover these costs will help get workers back to the office—and it may also encourage them to stick around during a tight labor market.

Global companies: Return to Office 2022 is an international trend

If you have employees in other countries, know that they’re feeling the pain at the pump, too. In eight countries surveyed, many employees said they plan to continue to work from home more often to reduce the costs of commuting:

According to Upwork, Americans saved a combined $758 million in gas costs by working from home during the pandemic. That’s a lot of money, and when it comes to disbursing commuting costs to your employees, you need a secure, reliable and easy system.

This is where Online Rewards—and our Award Code services—comes in. Unlike other reward card vendors, we can give your employees their choice of gas egift cards so they can pick their most convenient and preferred brand.

Let’s talk about your Return to Office 2022 incentive strategy, and how Online Rewards can get it up and running quickly.

Fill out the form below to get started.

Online Rewards is a highly versatile and powerful incentive and loyalty marketing solutions provider.  Since its formation in 2002, Online Rewards has designed, developed, and supported global rewards and incentives programs across a variety of industries and applications.

TALK WITH AN ONLINE REWARDS EXPERT

Interested in seeing how Online Rewards can help take your customer loyalty and reward fulfillment to the next level? Complete the form to schedule a tour with an expert for a quick and comprehensive overview of our platform.